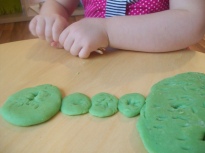 Apple cinnamon play dough not only smells good, but this batch turned out super smooth and very malleable! Notice the above picture is of a young child starting with a medium sized flat circle of dough and then following it are three small ones with the last being super large.  This child started each piece by rolling each into a ball and then using both elbows, flat hands and her stomach to smash the dough flat.  Comparing the size difference between circles was not a Teacher directed provocation.  This child chose on her own to compare the sizes of the five circles she made herself.  Each time a child creates or constructs he/ she is cognitively and physically forming knowledge about that object and shape.  The young mind takes into account the smell, color, texture and how this medium changes and in what ways.  What better way to really understand shapes than to actually create them from a material designed just for young hands and minds.

The next day apple cinnamon play dough was of great interest again, but more use was made with the adjoining craft sticks.  This time following a similar theme as above, this child chose to line up the sticks side by side. Comparing the same size and shape of each stick was the purpose.  And it was entirely the child’s idea.  Compare and contrast is also a concept that neatly fits into shape building.  Children explore the world around them by using tactile senses, eyesight, hearing, and movement as well as oral and sign language.  The whole child is engaged and the whole mind constructs the building blocks necessary for further academic learning. 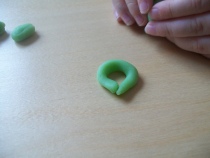 Small hands formed the letter “O”.  This “O” is for now a representation of my name.  Yes, it is not a letter in my name, but it is a start!  Emergent curriculum happens when young minds show internal interest and motivation to understand.  My job is to make sure to support and draw out the knowledge from within and add to it as we go through our preschool journey.